Waveform Lighting's ABSOLUTE SERIES™ technology is the LED industry's first LED product to achieve 99 CRI at D50 5000K and D65 6500K. The 99 CRI rating indicates that the emitted light is quantitatively near-identical to natural daylight. This is the holy grail of lighting!

Our linear module provides 800 lumens of full-spectrum 99 CRI light that is virtually indistinguishable from natural daylight. The LED Linear Modules can be dimmed using a PWM dimmer. Our tests using the FilmGrade Flicker Free PWM Dimmer (25 kHz) indicate that between 3% and 100%, spectral characteristics remain extremely stable. Specifically, 99 CRI is maintained, and chromaticity shift is within 1-step (MacAdam ellipse) or ΔE = 0.78. Our raw photometric measurement data in CSV format is available for download here.

Don't get me wrong, these are very good LEDs, I'm a photographer, but more of an aquarist. I have very rare fish from Tanganyika and to bring out their natural beauty ( it is most evident in the correct rendering of the specific blue color of Tropheus Duboisi's head) , you need excellent lighting. First of all, I bought a led from the Absolute 6500K series, unfortunately it turned out that it shines more like 5600K and not like the typical 6500K. I thought they sent me the wrong LEDs, but the LEDs are labeled 6500K But in fact, it's definitely not 6500K (they are little too warm, it's the color of daylight in full sun, not light from the shade). Leds Absolute rendering the Colors beautifully, but a little incorrectly reflects blue (too violet) without the depth of blue color. The manufacturer states that Ra is 99, which is confusing, this led gives the same effect as the Yuji Ra 95 led (which I have known for years). By buying the leds from the Absolute series, I expected an effect similar or even better than the Yuji leds from the VTC series , with Ra (only ?) 98, here the color temperature of 6500k is perfectly reproduced with deep blue. Summary: LEDs from the Absolute 6500K(?) series are very, very good, They rendering colors beautifully, but not , so correct color temperature, For an aquarium with plants they will be an excellent choice, but for an aquarium with biotopes, Tanganyika, Malawi, or Marine ones, it is better to use a cooler color led (typical 6500K). I must add that my observations are based on the fact that I have been using the best leds from other manufacturers for years and I have a comparison, so I can say that the word "Ultra" before the High CRI led in the Description is misleading
....adds two images for comparison 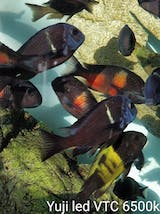 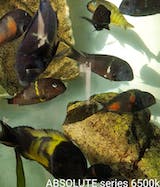 I
Ian J.
Great color and easy to work with

Ordered the set of five LED modules as a test for a product and both the color and brightness are great. These are one of only two products I could even find on the market that closely matched the spectrum of actual sunlight (and the other company both only produces lightbulbs and only responded to my emails after calling them out on Amazon).

Waveform on the other hand responded incredibly quickly and even pointed me in a better direction (to these modules) after I was looking at something else, but explaining what I was building.

All in all amazing customer service and great product, even having never really wired anything together - with their power supply and some wire and wire cutters I had these connected and lit up in maybe 15 minutes.

About to place my second order already.

I bought both 5000K and 6500K modules to try out. These modules are very bright at the maximum and can run very hot at the highest brightness. Consider sufficient cooling to these babies.

The color quality is excellent!

I make the lights for the tanks. I must say the color is too true

Beautiful depth of color detail on these lights.

The color quality in these absolute series are phenomenal 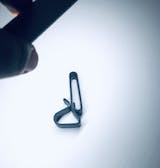 I purchased a 5-pack of these (5000K) to construct a lighting "array" for my daughter's oil painting station, along with the FilmGrade DC supply, flicker-free dimmer, and assorted connectors, etc. for assembly. I was a little apprehensive when I discovered the 5 modules were still connected together along the edge. So I emailed support and Josh replied within a day or two with excellent instructions and advice how to separate the modules without damaging the emitters or WAGO connectors. Using his instructions I was able to separate the modules, and then proceed to mount the lights, connect them, and had a working system on the first try. Four modules provide more than enough light for her work surface. So much so that she typically needs to turn them down a bit. And the color rendition is fantastic. Definitely 5 stars for the product and the customer support.

Bright, color correct, and easy to assemble with one very important caution: the WAGO connectors are a little flimsy and very easy to dislodge. Use the tool, and make sure you only exert pressure DIRECTLY DOWNWARD when opening the little grabber clips to connect the strips. The connectors are very easy to break off if you exert any sideways force at all. Also, they are not all properly mounted: you may wish to squeeze them gently onto the board (place the strip on a hard surface and push straight down with a finger) to properly seat. You will sometimes hear a click, indicating that your intervention was needed and successful. Five stars for the LEDs, three stars for the connectors. (Hence my four star rating.)